Ortho-Bionomy® is a holistic approach to healing and is helpful for a wide range of concerns from everyday stress and tension to impact injuries and trauma, repetitive stress, women’s health issues, surgical rehab, sciatica and other nerve complaints, arthritis, scoliosis, and cranial care.

Derived from a blend of osteopathy and Eastern philosophy, Ortho-Bionomy® supports the body’s preferences, creating comfort right from the start and throughout the session. This gentle process activates innate healing reflexes to release tensions, pain, and holding patterns, and allow balance, function, ease, and inner peace to re-emerge. These pleasant results tend to deepen afterward, because the body has re-established its internal message pathways. Sessions usually include self-care information, as well. All work is done fully clothed.

Ortho-Bionomy® is taught and recognized worldwide for being gentle, comprehensive, and profoundly effective. Truly wholistic, respecting the body as a living, dynamic, and intelligent system, Ortho-Bionomy® helps the body to remember and restore its coherence, ease, and function in individual parts and the entire synergistic whole. Ortho-Bionomy® attends to all the layers of the body–muscles, tendons, bones, joints, fascia, organs, fluids, nerves, and aura–and includes many aspects of bodywork you may have heard of, such as positional release, trigger point therapy, myofascial release, neuromuscular re-education, energy work, cranial, muscle energy, visceral, aura work, and so on.

Dr. Arthur Lincoln Pauls, a British osteopath-martial artist, developed Ortho-Bionomy® in the early 1970’s. The term itself means “right alignment with the natural laws of life.” By combining his understanding and techniques of osteopathy with the principles of martial arts, Pauls stimulated the body’s self-corrective reflexes to bring about healing without needing to use force or manipulation. “Force, when applied too much,” he said, “leads only to rebellion of the self instead of re-unification of the harmonic whole.” Respecting the body’s preferences, tensions, and pacing, while assuming no judgments or need for fixing, Ortho-Bionomy® is able to resolve patterns of pain, without causing pain.

During a session, a practitioner of Ortho-Bionomy® follows the body’s tensions, and gently eases the area into slack and comfort. This process provides immediate physical and emotional relief, and also engages the body’s innate self-healing reflexes. When the body re-experiences comfort, it begins to understand itself anew. Parts recognize themselves more clearly, as though a mirror has been held up to them, and they re-establish relationship with themselves and their neighbors. Deeper releases then occur, and the body relaxes, realigns, and comes into balance of its own accord, without being coerced.

The client’s awareness of sensations and subtle shifts is always invited in Ortho-Bionomy®, making sessions active, relational, and educational. A tuning in, rather than a spacing out. Specific self-caring exercises may be taught to further releases and integration, as well as empower the person in her/his own healing process.

Because the changes that take place come from within, rather than being externally imposed, the results of Ortho-Bionomy® tend to be long-lasting. Often the person will feel even freer and easier in the days following a session than s/he did immediately after the session.

How does Ortho-Bionomy® differ from Massage and Chiropractic?

Massage practitioners usually focus on muscles, using strokes, stretching, or deep pressure to soften tensions. Chiropractors use manipulations to bring bones and muscles into “correct” anatomical alignment. Both these approaches impose change upon you from the outside.

Ortho-Bionomy® practitioners impose nothing from the outside. Instead we follow the body’s preferences using gentle movement and touch to increase comfort, self-awareness, and stimulate your body’s self-healing reflexes. In this way, your body self-corrects from the inside out and better understands its healing process.

Somatic therapy uses the body to lead the way to self-understanding. When the so-called thinking mind is quieted, the body reveals a treasury of information, energy, and healing. When we pay attention to our present-time body—posture, expression, gesture; sensations such as tingling, vibrations, pulsations, and temperature shifts; emotions felt as sensations; spontaneous imagery and phrases; impulses to move—we come to greater clarity about emotions and difficult life issues. An added benefit can be freeing up physical tension patterns, chronic conditions, and even trauma.

A generic term that arose during the human potential movement of the 1960’s and ’70’s, “somatic therapy” may refer to any bodywork that sees the bodymind as a whole system and attends to the subtleties of the body. Usually, however, “somatic therapy” means counseling based primarily on body cues rather than talking and personal history.

Somatic therapy can be used:


As an adjunct to hands-on

A woman with a tight neck came to see me. She’d been experiencing pain and decreasing flexibility for about 3 weeks and had no idea why. Nor did her usual stretching and relaxation techniques help.

As she was a new client, I didn’t want to start at her source of pain, but “said hello” to her, starting with her feet and legs, and moving gradually up to her neck. Her body felt fluid and responsive to my touch. Her neck was another matter. I tried a number of tried and true techniques, but her neck stayed rigid. I was puzzled.

Curiously, this woman–who had been quiet throughout the session–began talking when I worked with her neck. The topic on her mind was her boss, and how difficult he was to get along with, how nothing she could do was right, and … “Is your boss a pain in the neck?” I asked. She began to laugh. As soon as that laugh escaped, before she could say, “Yes!” her neck began to free up. It quickly became its normal, richly mobile self.

She presented a classic case of suppressed emotions, held unconsciously in a body part, only to be revealed (her talking about her boss) when that part was contacted in a way that invited meaning to arise.

A middle-aged man came for his first session and sat slumped forward on the chair. His crossed arms were resting on his thighs, which were also crossed. His head was straight down. He’d come at the recommendation of a friend (one of my clients) to address depression, being out of touch with his emotions, and a feeling of being immobilized.

When he said he felt unable to take action on his plans, I laughed out loud, and said, “Please excuse me for laughing! But look at how you are sitting! Do you think you could get up and do anything from that position?”

He looked at himself, and seemed a little perplexed. I suggested he reach his arms out to his sides, like a child who’s saying, “It was this big.”

“Not so dull. Like I have a little energy. And I’m smiling.”

I asked him to stand, and led him in postural explorations of open and closed, upright and straight. During the process he noticed the shifts of internal energy, sensations, and emotions in each position. After a time, a pulling in his chest, which was also a factor limiting his opening, became the “loudest” sensation.

Then we began hands-on work on the table. When I contacted the discomfort in his chest, tears flowed. When he felt moved to speak, he explained he felt so much comfort and support from my hands, that tears of relief came. Then sadness arose due to the lack of comfort in his own life. All the while, the tension in his chest was softening.

Over several sessions, we continued a mix of guided awareness, movement, and hands-on. Soon he reported that he was recognizing and feeling emotions as they came up. It was challenging for him, but felt much better than being numb.

As this man became more in touch with himself and his body, our work focused more on releasing the chronic postural holding patterns that limited his emotional capacity. Freeing the holding patterns enabled his body to better express his up-to-date Self. And he was now learning to do somatic therapy on his own, keeping body, mind, and soul relating to each other in a timely manner.

Also known as visualization, interactive imagery has been used for millennia, cross-culturally, in medical and non-medical settings, to increase both relaxation and athletic performance, improve immune function, and support rehabilitation, among many other applications.

When Sara uses interactive imagery, she draws from the client’s own words, metaphors, and images that arise during the hands-on. Not only does this assure the client’s resonance with the imagery, but also supports the client tapping into and awakening the unconscious imagery s/he already has.

The imagery is the client’s way of describing his experience, and it guides Sara’s action.

Sara bends and lifts the legs, making the muscles softer, “What do your legs feel like now? What happens to the tree trunks?”
Client, “Ah, now they are more like birch trees; they’re able to sway in the wind, not so rigid. And as you hold them longer, they’re beginning to feel like legs again. I feel a flow within them, energy or pulses or something. And the periphery, I guess that’s skin, is soft again. The trees are gone.”

Shows imagery arising from Sara’s contact, and how Sara uses it to lead the client deeper into her sensations, body metaphors, and release.

Client, “When you hold me that way [front and back of pelvis], it’s like I have on a girdle. I can feel the constriction very clearly.”

Sara, “Tell me about the girdle. How tight is it? What’s it made of? How far does it extend up and down?”

Client, “Tight enough to remind me I’m fat, but not so tight that I can’t breathe. It goes from my waist to my hip bones, the bottom of my sacrum. It’s really strong elastic of some sort. I can pull on it and it doesn’t give very much.”

Client, “Hmm. I don’t think so, but I’m so used to it, it seems comfortable in some way.”

Sara, “So feel that comfort in your pelvis now.”

Client, “It’s as though the constriction is what’s holding me together, like a girdle used to.”

Sara, “Oh. So if you’re not feeling constricted you may fall apart? Is that right?”

Sara, “Are you willing to try an experiment? Feel that girdle again. How it runs from your waist to your hip bones, feel how tight it is. What would happen if you took it off? Will you fall apart?”

Sara, “How do you take it off? Do you peel that girdle from the top or tug from the bottom?”

Client, “I do a little of each. Peel and tug. Well, more peeling, it seems, as I imagine doing it.”

Client, “Relief! I can breathe much deeper. The constrictions feel looser. There’s some vibration or energy moving. And I feel a righteous fullness of my belly, not fat. It’s really sweet.”

I can’t thank you enough for all you did when I mistreated my body. You took someone who is a straight arrow and doesn’t believe in hocus-pocus and made me a believer in your bio-therapy. S.S., client 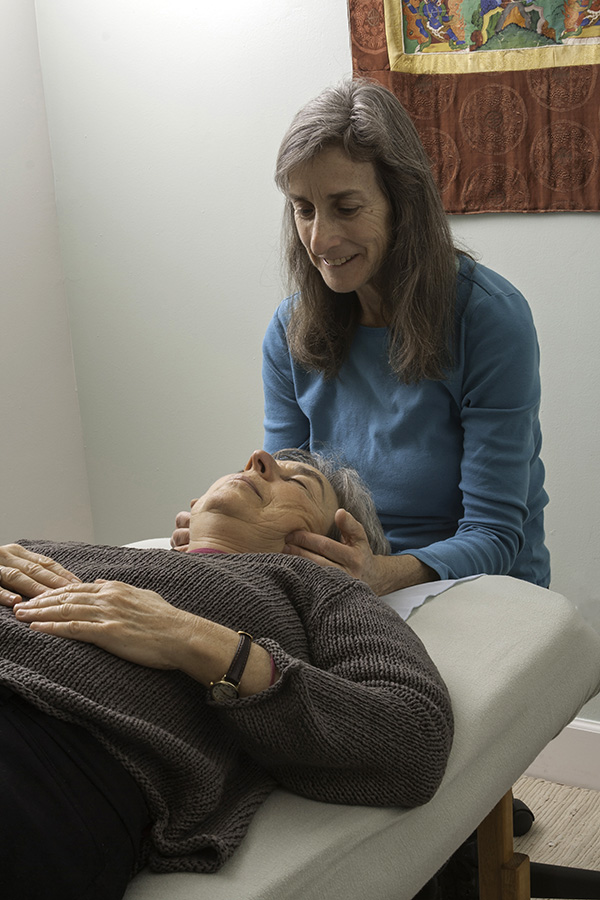